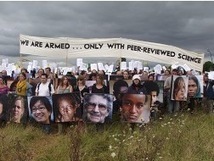 “So at this point it’s absurd to keep asking the scientific community to churn out more reports. In fact, it might almost be more useful if they went on strike: until you pay attention to what we’ve already told you, we won’t be telling you more.”

Not a bad idea, but will scientists have the guts to speak out (except for a few exceptions).