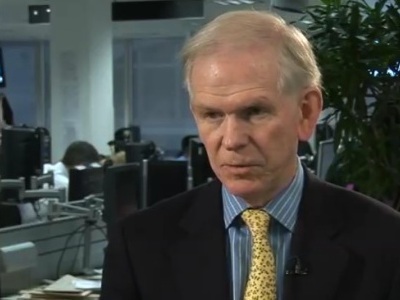 US economic growth will be less than 1% in the next fourty years according to a new analysis by famous American investor Jeremy Grantham. The contrarian investor sees resource scarcity and higher resource prices as well as demographic factors as the main reason why our global economies will continue to struggle for new economic growth. (Source: Business Insider)

As always the gloomy predictions of Mr Grantham’s piece make a lot of sense but will be neglected by the "don’t worry, be happy" myopic political and economic elites.

Read the full report and another interesting piece by Jeremy Grantham on climate chaos and scientists’ response in the journal Nature.

This interesting working paper written by the Grantham Research Institute on Climate Change and the Environment concludes that "continued economic growth is feasible and desirable, although not without significant changes in its characteristics.

These changes need to involve ultimately the reduction of the rate of material output, with continued growth in value being generated by expansion in the ‘intellectual economy’." (Source: LSE)

The Achilles heel of this thought-provoking paper lies in the fact that it starts from the fallacy that the "intellectuel economy" (the knowledge economy) has little or no material and resource implications.

On this and other fallacies about growth, read this brilliant article by Herman Daly. 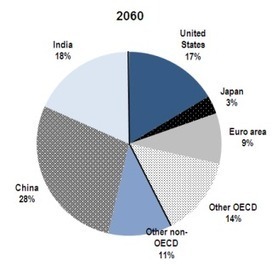 The new OECD report "Looking to 2060: long-term growth prospects for the world" predicts that in fifty years the combined GDP of China and India will surpass the entire OECD area. Growth will continue to be anemic in most Western countries and global inequality will remain high. (Source: OECD)

This pessimistic report completely neglects the issue of resource constraints to growth which was the subject of a recent IMF report. If you would add the predictions of the IMF study to the outcome of this one, it is clear that we are on track for a zero-growth world. Time to start rethinking our way of life if we want to remain relatively prosperous and have a good life.

"What if tools of the past no longer fit the economy of the future? Economic growth, as we have known it, is being constrained by an unprecedented slowing of growth in world oil supply. America’s path to future prosperity needs to recognize and confront this new energy reality, and adapt our economy to run on a lot less oil." (Source: The Hill)

What would you expect as long as “the American Way of Life is non-negotiable”? Americans (as well as Europeans BTW) just “can’t handle the truth”.

Gloomy analysis of our consumer society after post-growth collapse. Forbidden reading for anyone who believes "our way of life is non-negotiable". Truth is, nature will not negotiate and things are likely to be a bit less "nice" than described in this article.

"…what is emerging fast is the alternative of a commons based economy. Peer to peer, social sharing, collaborative consumption, commons, economic democracy are all terms that cover economic activity that moves beyond the market and the state, based on cooperation and harnessing human creativity." (Source: Energy Bulletin)

Excellent analysis by Derek Wall on the need to move to an economy of sharing, an economy of the commons as an alternative to failed socialism (state) and failed capitalism (market).

"The current crisis of global capitalism provides a unique opportunity to chart an alternative to the complicit collusion of central states and free markets that characterise liberal political economy. From this perspective, the proposed shift of focus from a self-interested pursuit of power or wealth (or both at once) to the quest for the common good opens the way for transforming modern economics. The alternative that this essay has outlined is a ‘civil economy’ whereby markets and states are embedded in the social relations and civic bonds that constitute society." (Source: OpenDemocracy)

At OpenDemocracy, Adrian Pabst sketches the contours of an alternative economy beyond free market and state, beyond austerity and neo-Keynesianism.

“The notion of ‘civil economy’ raises fundamental questions about the complex links between markets, states and civil society. Worldwide protests since 2011 reflect an implicit, inchoate awareness that ‘big government’ and ‘big business’ have colluded at the expense of the people. Both central bureaucratic states and unbridled free markets are largely disembodied from the mediating institutions of civil society, which in turn are subordinated to the global ‘market-state’.”

"Rather than the vision of competition for scarce resources, the way of the commons is to look for support in what is needed, and not to consumption; to use more than to exchange, in the conviction that there are sufficient resources for all. In its concern for ‘us’ rather than an emphasis on resources; in its ability to share from the standpoint of autonomy as opposed to the idea of an authority that imposes rules when faced with inevitable conflict – this is an anthropocentric vision of cooperation and not a competitive and rational-economic vision. It exercises more concern over access and use than over property. More attention is paid to individual and collective wellbeing in sharing than to competing." (Source: Open Democracy)

Brilliant article by Spanish professor Joan Subirats in Open Democracy on the "commons",  democracy and the internet. Must-read.

"To sum up, the existing economic and political system has proved incapable up to now of embracing anything like an adequate level of climate mitigation. It can be argued plausibly that it is already too late to prevent runaway climate change. It is certainly touch and go. There is nothing inevitable about the future. Nevertheless it is clear that we are entering a period of economic, social and political turmoil brought about by peak oil, peak debt and the decomposition of a political system that millions of people now regard as corrupt and not to be trusted. There is increasing recognition even in parts of the business elite that major changes in the transformation of the energy system are going to be needed and that it does not make sense to deal separately with peak oil and climate change." (Source: Energy Bulletin)

“The key idea here, to return to the idea of indirectness, is that climate policies need to be not just head on attempts to tackle climate change but ideas for society – for reconstructing energy systems, for maintaining macro economic activity and employment (if not growth), for expressing new ideas of social justice and also for making clear how we are going to look after each other.”

"In a more rational world, political leaders might come together in a special forum to acknowledge the nature and severity of the crisis and to establish the institutional and procedural basis for a worldwide “Survival 2100” project." (Source: Solutions)

Author William Rees is the co-father of the ecological footprint. His absolute must-read "Project Survival 2100" article in Solutions is surely one of the best efforts to define the contours of a blueprint for the real sustainability revolution humanity needs. It is way more realistic than the superficial and unambitious gobbledegook of the Future we want Rio+20 final declaration.